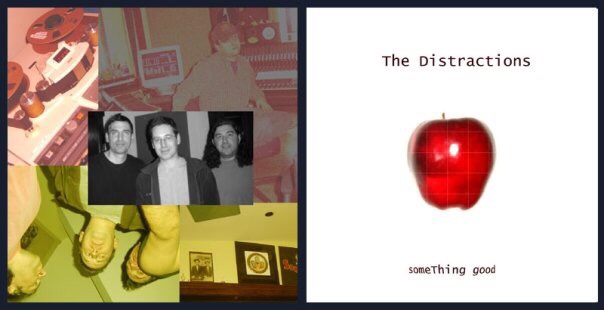 This gem popped up today as a “memory” on my Facebook feed. In 2008 my three best friends and I went into the studio to record the first album by The Distractions since 1994. If we stay on that schedule, the next record should be due in about 3 years.

The Distractions were my first band. The inset black and white photo shows the three members, Matt ‘Mato’ D’Ambrosio (drums), me (guitar, vocals, keys) and Todd Haviland (bass). At the board (top right photo) is Marc Fuller, producer, engineer, and fifth Beatle. The genre was pretty standard alt-rock singer/songwriter stuff, in the vein of The Replacements and REM. And, we were pretty good at it.

This record is one of my favorites that I made. Some of the best tunes I have ever written are on here. It was a weird time in my life. The last few years of my marriage were not great. Any casual observer would have seen that they were indeed going to be the last few years. This record was written smack in the middle of the mess. The situation did not make for a very happy day-to-day, but it did prompt me to cathartically create some pretty great tunes.

Here is a track by track breakdown. My own two-line reviews, I suppose.

King of the World

My weird little utopia in which I bring The Ramones back to life and the weather is determined by the scenes in my daughter’s dreams.

A song about continuing to try when all reasonable hope of success is gone. Was I singing about my marriage or my music career? Who knows?

This is one of my favorites. A nice acoustic song, continuing the theme of delusional false hope.

Big as Your Soul

This was loosely inspired by the OD death of a friend. It ultimately though is introspective  Also, it rocks.

This is a pretty literal telling of a bad time.

I don’t think I realized it at the time, but I think this is sort of a sister song to Better By Far. It’s about aging, I suppose.  It’s pretty.

Fun, kind of funny, also an acknowledgement that the forces within and without are in control. So, only kind of fun I guess  LOL

A rocker, looking for something better. Cool guitar in this one.

Just a fun, silly song about my own neuroses.  Good times.

High up in the Sound

This one is like a little love song to rock. But it’s not my favorite. This is the only track I ever fast forward.

I love this song.  Life, death, wasted time… a tired slacker looking back and a bit apprehensive about the future.  My buddy Marc Fuller deserves most of the credit for the cool sound of this tune,