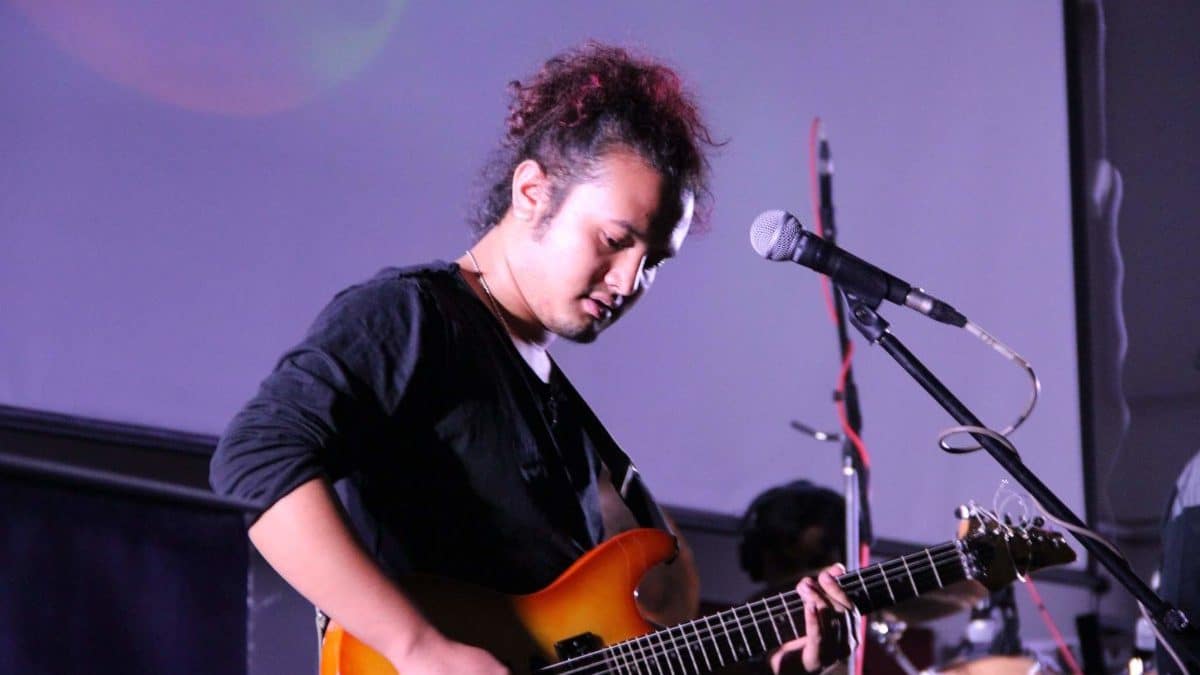 Priyant’s Darjeeling Groove is the international, genre-bending fusion project of Mr. Priyant Sundas. The multi-instrumentalist, composer, and producer has created the album, “Blended”. It is a record which is nearly impossible to classify, but a joy to listen to.

The six song collection is a thirty six minute journey through jazz, pop, classic rock, traditional Nepali and classical Indian music. It even has a little bit of theater. The record is packed with sophisticated arrangements, tasteful and informed culture blending, and virtuosic performances.

But if I try to encapsulate the record as a whole, I will fail. Instead…

In a lot of ways this song sets the tone for the whole record. The track starts as a mellow ensemble featuring an acoustic guitar, saxophone, and sitar. The style is Hindustani, a classical Indian music. However, there are shades of fusion jazz and classic rock.

At the halfway point, the mellow tune turns up the heat with a percussive drum and acoustic guitar jam. The raucous guitar solo eventually breaks down to an impressive display of scat vocals and guitar, doubling one another in rapid-fire staccato scales.

Half of this one is traditional 1980s-style pop music. It is a multilingual love song and seems content to stay that way. However, Priyant once again surprises us with some fancy contemporary jazz arrangements.

By the second run-through of the chorus, we realize that the band has gotten bigger. Just then, they break into a fusion jam, complete with a rocking Sarangi solo. The last two minutes of the song are fairly epic. A big, sprawling Springsteen-esque sound supports a stratospheric vocal performance. This big song, ends big.

Right from the first note, this tune reminded me of Harry Nilsson. It feels like “Everybody’s Talkin.” Both songs have that, “strolling down a city street,” vibe. However, by now we know that there is a surprise around every arrangement on this album. The surprise here comes in the form of an accordion, accompanied by a cello. It is a really cool sound.

This is the record’s most 70s Rock moment. The performance, production, and arrangement came directly from that school of Rock. I’m not talking about an über complicated Rush-style riff fest. This more of a melodic jazz chord change, played in a Styx-style.

Once again though, at the halfway point, Priyant takes us on another multiple genre adventure. The second half of “Dreaming” rolls from an acoustic guitar and conga beat and then to a Chick Corea style analog synth jam. The song ultimately finds its way back to the main verse and rolls to the end on the wheels of a stadium sized classic rock guitar solo.

Miles Davis created fusion on his album Bitches Brew. After that masterpiece was delivered to the world, the members of Miles’ band all went out and started their own fusion bands. That’s how the sound happened.

This track is straight-up fusion jazz. The band here sounds as though they were lifted directly from a recording session in those early post-”Bitches Brew” days.

Although all of the instruments shine here, much of “Heartsky” is a guitar song. And the guitar playing is fantastic. It reminded me of old-school John McLaughlin, back when he still rocked out.

After a rocking guitar solo, the song slows down for a comparatively relaxed and bluesy sax solo. However, the whole mix eventually builds back up to the track’s earlier urgent pace. The complex melodic and time changes here reminded me of the jazzier Zappa stuff.

Love is You and Me

The record ends with its most traditional song. The tune is a beautiful love song featuring a broad theatrical arrangement. This song sounds like the love theme to that hot new Broadway musical everyone is talking about.

“Blended” is a really fun musical journey. Follow the links below to follow Priyant on all of his audible adventures, past, present, and future.

Mr. Priyant Sundas is an internationally renowned musician, vocalist, and performer, who has made significant contributions to numerous performances. The scope and range of Mr.Sundas’ many productions are truly a testament to his distinguished status as an influential guitarist, vocalist, and performer, as he has made great contributions to many of America’s most popular productions in recent years.

A graduate of the renowned Berklee College of Music in Boston, Mr. Sundas is a versatile musician and multi-instrumentalist, including the Guitar, Lapsteel, Bass, Piano, Voice, Drums, Harmonium, and Saxophone. Also, an accomplished arranger, writer, and composer Priyant is the founder and bandleader of the music collective Priyant’s Darjeeling Groove, whose full-length album “Blended” – fusing international sounds from Indian Hindustani Classical to Nepali Folk – was released worldwide on March 2019. Other major achievements of Mr. Sundas include acclaimed recording in association with Berklee Indian Ensemble, for A.R. Rahman, among others.