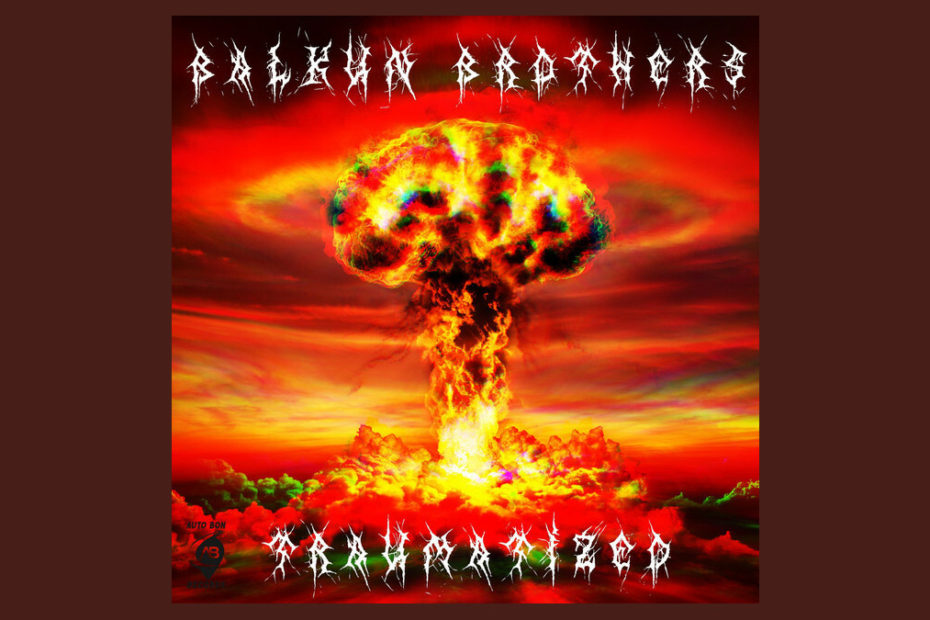 The Balkun Brothers rock. That’s all there is to it. This is not one of those reviews in which I will talk about bending genres, hyphenating styles or hybrid anything. These two brothers play massive Rock & Roll. Although they are just a duo, their sound is bigger than a group twice their size, bigger in every way than logic would seem to allow.

The band consists of actual brothers; Nick ‘The Hammer’ on Drums and Steve on guitar, vocals and something called a ‘thumb-bone bass.’ They’ve been doing their thing since 2010, touring the world with their inexplicably powerful sound. There have been other guitar/drum duos in Rock & Roll; The White Stripes of course, and the considerably less famous (but equally awesome) Flat Duo Jets. However, neither can compare to the powerhouse punch of The Balkun Brothers.

“Traumatized” is the band’s advance single from their forthcoming album “Here Comes The End Of The World.” From the moment Steve howls over the first power chord crunch and cymbal crash, it is clear that the Balkuns intend to summon Armageddon. Like a long lost recording of Nirvana covering a Black Sabbath song, the band rips into riff-fueled Rock assault.

Both brothers are in lock step throughout the song. There is a cool doubletime jam in the bridge and at other times they dip into Iron Butterfly worthy Heavy Metal psychedelia. Steve manages to pull off some intricate playing while his guitar squeals through what sounds like a string of Fuzz pedals and a Marshall Stack cranked to eleven. Vocally he bears more than a passing resemblance to Lemmy Kilmister. For his part, Nick drums with the power of Bonham and the controlled chaos of Keith Moon.

To recap, in the last two paragraphs I compared these guys to Nirvana, Black Sabbath, Iron Butterfly, Motorhead, Led Zeppelin and The Who. The coolest Heavy Metal stoner in your high school thinks that those are the baddest Rock & Roll bands in history, and he is correct.

I’m not the only one digging The Balkun Brothers. Their forthcoming album “Here Comes the End of the World” was produced by the legend, Steve Albini. (You may know him from a little thing called “In Utero.”) You can pre-order the record now on their website. And check out “Traumatized” on the Deep Indie Dive playlist. Follow the links below to connect with The Balkun Brothers.

The Balkun Brothers on the Deep Inde Dive playlist