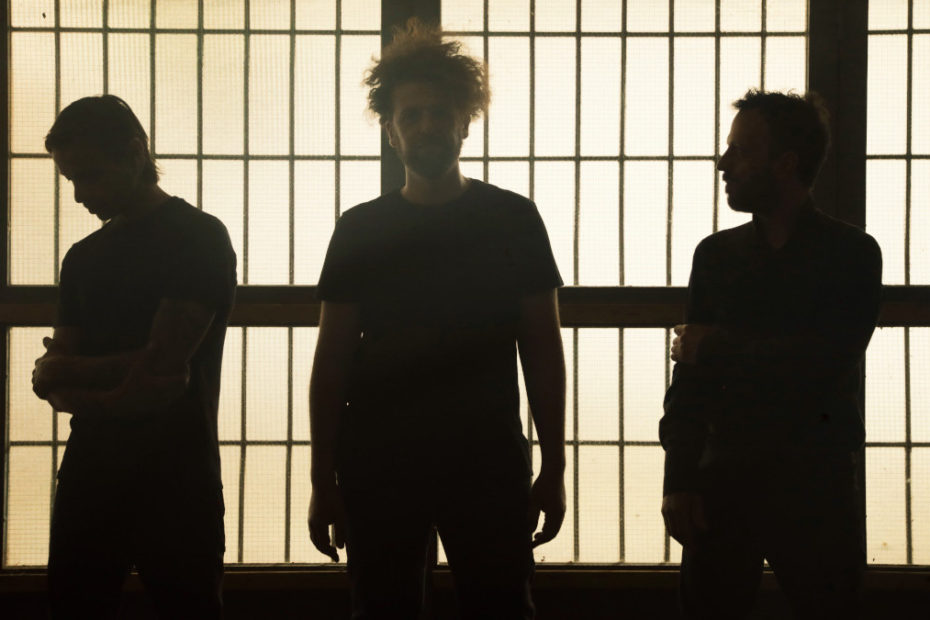 Katrame is an experimental electronic band mixing elements of Synthwave and Goth to create a uniquely rhythmic yet ambient sound. The trio from Athens, Greece accurately describe their own style as, “sturdy basslines and electronic beats combined with dark melodies, aiming to create emotional soundscapes and images.”

Earlier this year the band released their debut album “Sose,” on Amour Records | EMI Records. The eight song collection introduces us to Katrame’s world of lyrically visual, cinematic and percussive darkwave music. Each song mixes the organic and electronic. Live and looped guitar and bass lines jam with real and programmed drums and retro analog synths.

After the ambient synths and earnest vocals of somber ballad, Cherry Dub,” the album takes an experimental path. The title track launches from Sonic Youth-style punk/electronic experimentation and then builds to a Bauhaus/Love and Rockets vibe. “Crossroads” has a cool anachronistic blues feel with a rootsy looped acoustic guitar riff paired to a modern abstract beat. The hypnotic organic groove builds with the addition of keys, guitars and other effects.

The gated lo-fi beat of “All You Want” brings to mind the more experimental U2 stuff, like “Numb.” As the song progresses, bass heavy piano chords add a gothic mood to match the song’s emotionally dark lyrics. The last two minutes of the track evolve into a jazzy jam.

“Round One” and “Round Two” follow. The songs are a pair of instrumental drum and bass grooves. The songs build with ever increasing intensity. Samples, guitars and synths create a rich horizon of sound. The two tracks remind me of some early Police instrumentals like “Behind My Camel” or “Regatta de Blanc.”

The album ends on the emotional “Once More.” The track sounds like a long lost post-modern Leonard Cohen experiment. As is the case with much of “Sose,” we are drawn in by the song’s indiscernible point in time of origin. Katrame’s sound is simultaneously modern and retro. The closing track’s epic Art-Rock coda is further evidence of their existence outside the normal linear flow of time. It’s a great listen.

Check out “Sose” on the Deep Indie Dive playlist. Follow the links below to connect with Katrame. Get in the loop on all this exciting band has planned for the future.