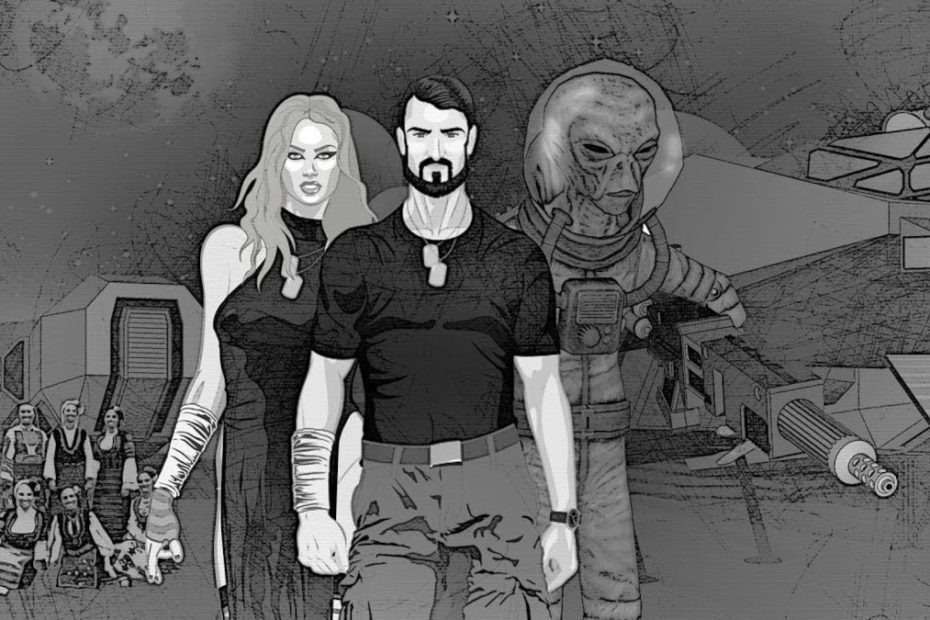 Haris Cizmic is a multi-talented musician and multimedia artist with a storied past of international origins. Originally from Bosnia, the multi-instrumentalist got his start in his hometown of Sarajevo. That is where he formed the band AXA in the late 1990’s. The group eventually moved to the United States in the early 2000’s, settled in Detroit and changed their name to INGRAY. The Hard Rock band made a name for itself in the Motor City and remained popular until their split in 2011. Since that time Cizmic has worked on various solo projects and composed/recorded film scores.

In 2020, like the rest of the world, Haris found himself with a surplus of free time on his hands. With daily disasters on the news and no external outlets for his musical inklings he dug into a brand new solo project. He began working on a new single and video but this time this time he wanted it to be more. The project developed into a Sci-Fi world building enterprise with an animated short film titled “Romantic Cowboy vs Space Aliens” and a full cinematic score.

It is a classic story of love, hope and revenge, but without a twist and was done as my answer to this global idiocracy, and these very strange, ugly, insecure and paranoid times we’re living in.

“Romantic Cowboy vs Space Aliens” visually tells the story of Eyeece (the space cowboy), his love interest Tza-Nah and the alien Wooga Baat. In a timeless ‘damsel in distress’ tale, our cowboy hero sets out to save his beloved Tza who has been captured by Baat. Eyeece flies his spaceship to the alien’s planet and single handedly kills an army of baddies to save his love.

It’s a tale echoed across centuries in stories ranging from Rapunzel to Super Mario. However, this time Haris Cizmic tells it with cool and edgy comic book line art and a funky soundtrack. The score mixes a percussive electronic groove with classic organic Western instrumentation and cool Doctor Who-style theremin-in-space synth tones. In sight and sound “Romantic Cowboy vs Space Aliens” is a highly entertaining and professional production, complete with a blooper reel. The song and video will leave you begging for a sequel.

Check out the video below. You can also hear “Romantic Cowboy vs Space Aliens” on the Deep Indie Dive playlist. We had the chance to chat with Haris Cizmic about the film. Check out his answers to our 8 questions. And follow the links at the end of this article to get in the loop on all of the current and future projects from the diversely talented and prolific artist.

Where are you from?
I am from Sarajevo but I recorded, released and performed music in the US for long.

How long have you been making music?
Since the late 90’s. I formed a metal/rock/electronic band AXA in Sarajevo, then I’ve reorganized it some 10 years later in Detroit, naming it INGRAY *under which name we won Hard Rock’s Ambassadors of Rock title in 2010. Also we got signed for DarkGreene Entertainment, released our most popular album “Away” and got featured on cover pages of music magazines in Michigan.

Who are the musicians involved in your project?
It’s mostly me. During the band(s) years, it was other people of course. Still, I was the one who wrote songs, played keys, bass, some guitars, arranged and spent long hours with the producer mixing…

Who are your biggest musical influences?
My influences are from all over the place. From Jean Michele Jarre, to Depeche Mode and Megadeth. And everything in between…

What is your greatest non-musical influence?
Being a professional creative artist, art director and designer myself, I would say Alan Fletcher, one of the pioneers in advertising graphic arts.

What inspired you to create this project?
This is my CLB project (Corona Lockdown Boredom). Also my wife is my inspiration, and she is also animated in the video. But the main inspiration came from the ugliness of our current world, from idiocracy and retardation of the humankind. It just pushed me in some different direction, making this (almost cheesy, predictable and over-the-top) animated video. You know that old saying “you can tell it’s a crisis when women wear sparkling dresses”. Well in my case it’s crisis when I do corny animated videos and score non-heavy tunes (laughter)…

What are your plans for the future (musically)?
I play by the ear. Being a professional creative artist, it don’t leave me much time for music. But when I do it, it’s mostly some film score, some TV music or a theater play soundtrack. Most recently I’ve scored music for a theater play in Chicago. Before that i’ve done a couple movies. With “One Last Call” I’ve won award.

Is there anything else you would like to say?
I think that this pandemic time brings lots of unknowns and will change the landscape of everything including music. I wish I was wrong, but I think that the music industry as we knew it is over, done, gone. Everything will have to change, transform (I want to say evolve, but I’m not sure if this is a good thing at all).

So I have literally stopped working on my full length studio album, I’ve re-grouped and publish this single, hoping that one of these days I will wake up from a nightmare and I’ll be standing behind a stage with a drummer and a guitarist, getting ready to play a set, like before.