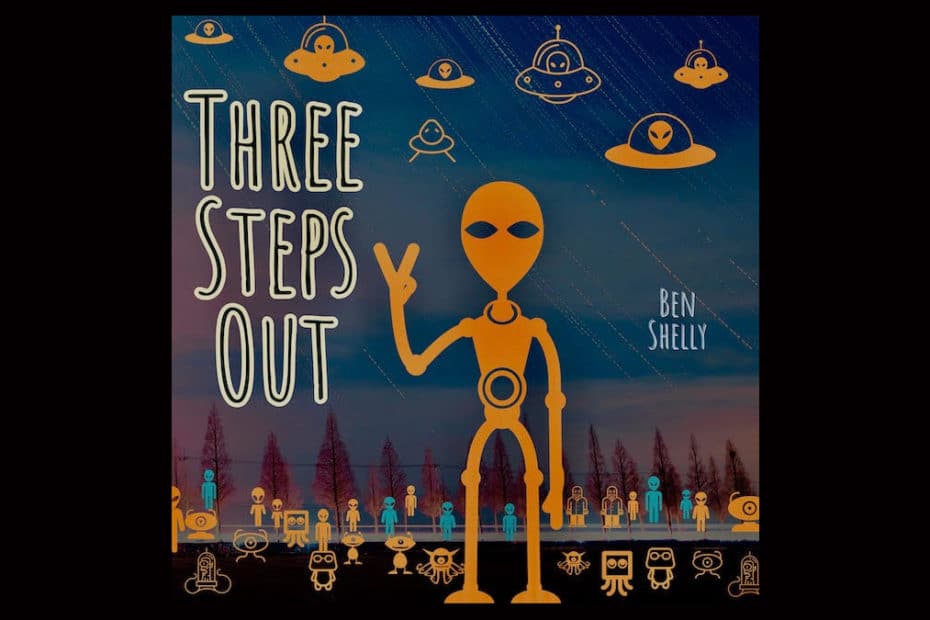 Ben Shelly has taken an interesting road to his current gig as an independent musician. After being raised in the New York metropolitan area, he moved to NYC’s Greenwich Village as an adult. Ben worked as a hedge fund trader in the financial sector for many years. Then five years ago he traded in his suit and tie for shorts and sandals. He closed up shop and moved to the other side of the world. Ben now calls Kailua, Hawaii home.

Earlier this year he decided to go public with his lifelong songwriting hobby by releasing a series of singles. “Three Steps Out” is the latest from Ben Shelly, released worldwide to all major streaming services on May 14, 2021. The laid back Alt-Folk/Blues tune rides on funky acoustic blues riff and a smooth downtempo, lo-fi beat.

Alternating between a chill bluesy lead vocal and some old-school Hip-hop rhyming, Ben’s vocal style lands somewhere between Jerry Garcia and G Love. As the cool hippie blues groove rolls along Ben Shelly delivers a tale about aliens, world leaders and the sorry state of our world. He plugs in the electric guitar near the end of the track for a healthy dose of Psychedelic Rock.

Conceptually, this song is about the failure of our leaders and humanity in general to respond to a crisis or even an important new development effectively.

Check out “Three Steps Out” below. You can also hear the track on the Deep Indie Dive playlist. We had the chance to chat with Ben about music, life, et al. Check out his answers to our 8 questions. Although he shies away from social media, you can CLICK HERE to find Ben Shelly on your favorite music streaming service.

I was born in Jerusalem, but emigrated to the US as an infant. I’m a US citizen and I say that only because people seem to like to ask. I grew up in Queens NY but went to high school and college in NJ (Rutgers). I was on the Rutgers wrestling team as well. I lived at the Jersey Shore (Manasquan) for a while before moving back to NYC (Greenwich Village) where I worked professionally as a Hedge fund trader and lived in the village for many years.

I’ve been writing songs for 20 years, and have been in a few bands as the frontman/lead singer. I have a hundred songs, but I’m never quite sure which ones to spend time producing.

I do everything myself unfortunately. Would love a label to take over promotion and engineering.

When I was a troubled kid with a difficult family environment, Eddie Vedder’s (Pearl Jam) song Alive touched me deeply and made me want to become a musician. The path to making music was so challenging and seemingly impossible after several years and attempts that I ended up going for a career that made money (wall street). But I never stopped writing songs.

I love 90’s Hip Hop, Mobb Deep, Pac, Biggie, Outkast, DMX and G love and special sauce. I love playing acoustic guitar and the Dave Matthews Band is probably a big influence. I love his percussive playing and I think this track displays a bit of that. I also love Blind Melon, Rage, 311, and any gutsy guitar player (Prince, Jonny Lang). Can’t leave out the songwriters, Dylan, Simon, Waits, Jack Johnson. On the Jam Band highly under the influence side 🙂 I love Phish and Medeski Martin and Wood. The greatest live show I’ve ever seen was The Black Keys at the Garden and I’m a huge fan of theirs as well.

Great question. I guess a decade on Wall Street made me realize that while I was a successful trader, I didn’t really like the environment or the people I was surrounded by and slowly but surely it drove me back to my passion of making music.

Living in Kailua Hawaii, a spectacular beach community, has really inspired me and changed my life and pushed me to get something done in music. This is my 4th release and I intend on releasing a new song every month indefinitely.

Honestly, Bob, I don’t know what I’m doing. I’d love to play some live shows but I need a band to recreate my sound (I think). Bands are tricky though, and my prior experiences were not great. Right now, I’m just trying to build an audience and a following and then hopefully get picked up by a label where I can offload some of these incredibly challenging aspects of music such as producing/mixing/mastering and promoting.

I’m always looking for legitimate promotion services like yours. If you know of any others, please feel free to let me know. I think what you do for indie artists is great. While the doors are certainly more open to indie artists now than they were ever before, it still seems like the labels get all the play. We need more people like you!