Datura4 – Blessed is the Boogie 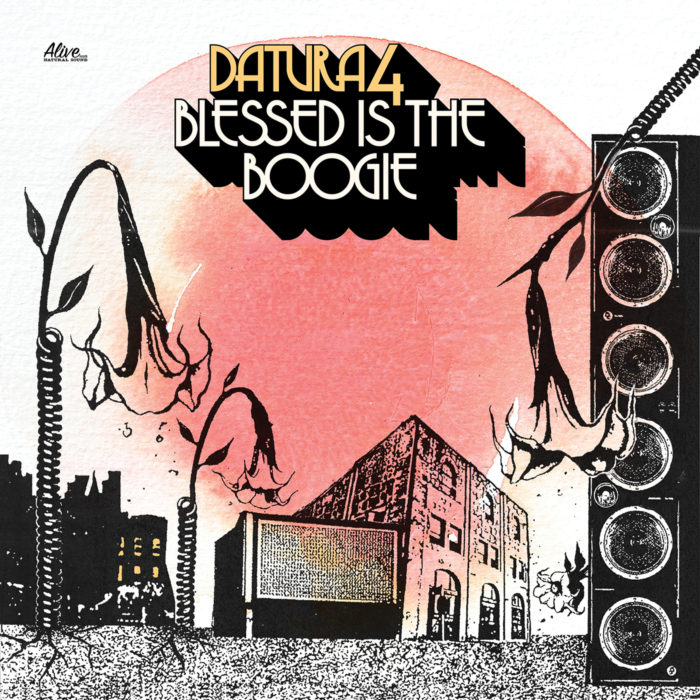 Hey kids, do you love the Rock and Roll? Of course you do! And Australia’s Datura4 is the real deal. Big fat guitars, driven by a big fat kick drum, a thumping bass line, and whiskey-fueled vocals from a singer who is going to steal your girlfriend after the show.

The instant that first distorted riff and slide guitar of ‘Run With Lucy’ hit my headphones I was hooked. It was 1976 and I was rocking out to an AM radio in my room, past my bedtime. In a perfect universe, Marc Bolan would come back to life and T-Rex would play a show with Datura4. Maybe Brownsville Station could warm up. And they would all bring that solid rock boogie.

That’s what it is all about with Datura4, the boogie. It’s not about being retro. This kind of rock is timeless. Their new record ‘Blessed is the Boogie’ is a celebration of what Rock and Roll sounds like at the back of the bar, just before a fight breaks out. This is fun stuff. Check it out

Here is what Datura4 says about ‘Blessed is the Boogie’

”Blessed is the Boogie” is the eagerly anticipated third album by Western Australian rockers Datura4.

In 2009, a combo of highly respected Western Australian musicians came together to have some fun playing no-frills boogie rock n’ roll in pubs around Perth and Fremantle. But it was a yearning by leader Dom Mariani to get back to his early influences that formed the foundation of the band.
“Blessed is the Boogie” is ten new songs that build on Datura4’s ‘guitars to infinity’ approach of “Hairy Mountain” (2016) and the hard rocking, progressive blues and psychedelic stylings of debut LP “Demon Blues” (2015). Both albums were released through Alive NaturalSound Records and gained critical acclaim at home, in Europe and the USA.

Mostly recorded in a studio farmhouse south of their home town of Fremantle, “Blessed is the Boogie” takes Datura4 a few swaggering steps further. Mariani continues his successful collaboration with bass player Stu Loasby (The Majestic Kelp) and drummer Warren “Wazza” Hall, the original drummer for The Drones. Adding a an extra dimension to album the new line-up is bolstered by the inclusion of long-time friends Bob Patient (Fatty Lumpkin/ Dave Hole) on Hammond organ and piano.

Dom Mariani came to prominence on the music scene in the 1980s with legendary garage rock combo The Stems who released a string of now classic singles that topped the alternative music charts, culminating in the release of their debut album “At First Sight…Violets Are Blue”. Mariani later went on to form revered power pop outfits DM3 and The Someloves, where his knack for writing infectious melodies gained him respect and a well deserved reputation on the international scene.

Growing up in the isolated port town of Fremantle in the 1970s on Australia’s west coast, Mariani was a budding guitar player who worshipped the Beatles and Creedence Clearwater Revival. As music trends evolved, he found himself deep in Australia’s burgeoning pub rock scene, thanks to hard rocking local groups like The Aztecs, The Coloured Balls, The Masters Apprentices, Daddy Cool and Carson. At his first ever rock concert he witnessed The Coloured Balls and Sitting Bull, two bands that would spark his interest in the heavy sounds of rock and blues guitar. Sitting Bull were local heroes that would eventually play at Dom’s high-school social. This, along with a music/art program GTK which aired each week day for 5 minutes at 6:30pm on the ABC that offered many of the great bands of the day nationwide exposure – set Mariani on a journey of blues and heads-down, full-tilt boogie discovery.

Since their inception DATURA4 have established an impressive live reputation and have also had the honour of opening up for the legendary ZZ Top, Little Steven and the Disciples of Soul, The Pretty Things, Endless Boogie, Earthless, Tumbleweed, X, You Am I and New Zealand guitar legend Kevin Borich.