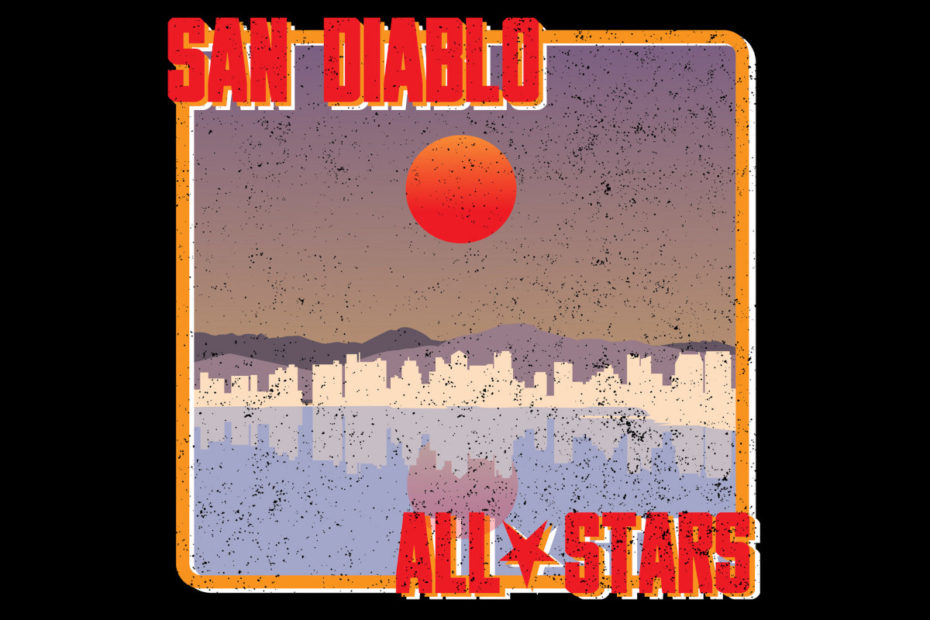 San Diablo Allstars is a San Diego super group comprised of names with which regular readers of The Static Dive are well acquainted. The project is a product of a collaboration between three different Cult Muzic artists. You may remember the label as the home of Black Hesher and J Andrew, each of whom have appeared here before. The two have joined forces with label mate Michael Fairchild (aka Maestro) of the San Diego Music Awards nominated punk band The Spice Pistols and Cult Muzic band The Bathwater Babies.

Black Hesher (aka King Shem) is the boss over at Cult Muzic. As both an Alternative Hip-hop producer and artist he is responsible for a sizable chunk of the label’s output over the past couple of years. In that time he has connected with fans worldwide and in his hometown, recently winning the “Best Local Hip-Hop” in the “San Diego Reader Best Of 2020 Poll.”

Similarly, J Andrew has been responsible for an impressive output of his own material as well as previous collabs with Shem. This new project was actually born of the song “Smoke Em,” a Hip-Hop/Rock collab between the three artists that appeared on Black Hesher’s album “Saints and Sirens.” Shem and his crew have always played fast and loose with musical genres. They mix up Hip-Hop, Rock, Blues and even Jazz like they’re all ingredients in a bowl of pasta primavera. On the eponymous San Diablo Allstars debut they have taken the success of that mantra as a mandate to create an Alt Hip-Hop mixtape for their end of the world party.

From the opening power chords and old-school beat of “Hatchback,” with its Southern fried chorus and nostalgic party vibe, it’s clear we are in for a ride. What follows is a collection of 12 more songs that take us down a rabbit hole of Rock riffs, classic TV and movie samples and old-school freestyle rhymes.

“Lord Zilla” matches Hip-Hop posturing with samples of Blue Öyster Cult’s “Godzilla” and “news” reports from the classic monster movie. “Know My Name” is built around the best weird Beatles song from “The White Album,” while “Kojak” pairs funk horns and psychedelic synths with quotes from Telly Savalas’ famous bald detective. All the while, the trio of rappers drop references to everyone from Bruce Lee to Gabe Kaplan.

That adventurous hybrid of musical styles and Pop culture flavor permeates the entire album. From the Alt-Pop melodies on tracks like “Clowns” and the Beck-esque “The Land Mine Sleeps Tonight” to the “John Belushi/Mount Fuji” rhymes of the 40’s Swing Jazz infused “Sing,” the record is a blast of schizophrenic short attention span theater. Each of these artists has a long history of creating wild mash-ups of disparate cultural sources. As the San Diablo Allstars they are clearly adding fuel to each other’s creative ADHD fire, and it is a ton of fun to listen to.

Lyrically, it is a party record. Although they frequently dip into some darker themes like drugs (“Dock Ellis”) and societal woes (“War all The Time”), even then they just stare Armageddon in the face, flip it the bird and keep dancing. The most notably avant-garde detour in this album of Kenny Rogers, Timothy Leary and Barnaby Jones shout-outs is “Hank,” which features the legendary booze-fueled poet Charles Bukowski reading his own writing over a Hip-Hop beat. It’s that kind of party.

You can hear The San Diablo Allstars’ “Know My Name” on the Deep Indie Dive playlist and “Sing” on the Deep Indie Beat. Follow the links below to connect with the group and all of the exciting projects coming out of the Cult Muzic roster. They are on a roll and it is a fun ride.