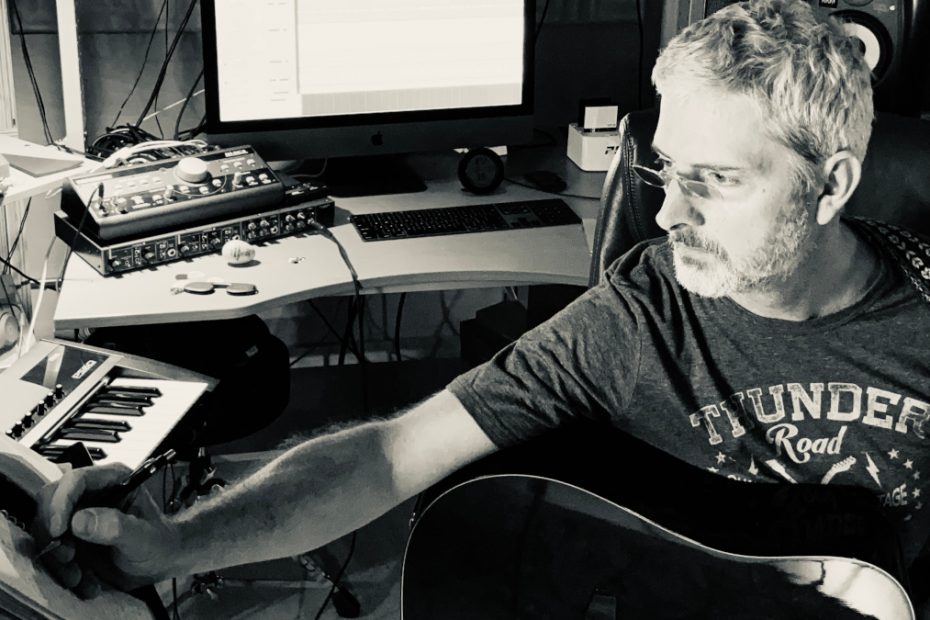 Leezoid is the new solo project of singer, songwriter and multi-instrumentalist producer Lee Conley. A veteran of the legendary Pacific Northwest music scene, he has performed in bands around the Seattle area for decades.

In 2019 Leezoid released the appropriately titled debut 3-song EP “First 3.” That record introduced an innovative artist whose sound is inspired by great Proto-punk pioneers like The Stooges and Television, with a healthy dose of raw modern Lo-fi and Alternative Rock. After two years of relative silence Conley returned in 2021 with a newfound creative spark. Since September he has released three singles and the singer promises more on the way.

“It Doesn’t Matter (You’re Going Down)” is the first of Leezoid’s latest singles, released worldwide to all major streaming services on September 10, 2021. The track opens on a bluesy guitar riff which remains at the heart of the mix throughout most of the song. Soon an ensemble of bass, drums and tambourine join in for a laid-back groove reminiscent of a mellow Black Keys.

The track rolls on a mix of 60’s Pop and modern Indie Rock as Leezoid warns an unnamed unsavory character of his impending doom. A trippy mix of overlapping and harmonized vocals creates a hypnotic vibe. Lee adds a psychedelic exclamation point to the mix with some Jimi-inspired fuzz tone Acid Rock lead guitar. It’s a very nice touch.

Check out “It Doesn’t Matter (You’re Going Down)” below. You can also hear the song on the Deep Indie Dive playlist, or listen on your favorite streaming service. We had the chance to chat with Lee Conley about the Leezoid project. Check out his answers to our 8 questions below. Follow the links at the end of this article to connect with the artist. Get on his website and socials and join him on this new phase of his musical journey.

Tacoma WA. Currently residing in Kent WA, a suburb of Seattle up here in the Pacific Northwest.

I started playing guitar at age 15 and soon after formed a band with my high school pals, it was amazing! We barely knew what we were doing. It was truly the spirit of rock n’ roll!

Leezoid is my solo endeavor at the moment. So mostly just me, however in my latest release ‘to find me’ Darryn Ray is the featured drummer.  We played in bands together in Seattle in the mid 80’s, and epic Solstice drum circles over the years. Also, I’ve been working with singer, and beautiful daughter, Amber Midori, in an upcoming release called I’m Alive out later this fall.

My father had an amazing record collection growing up in the late 60’s and early 70’s  that included the Beatles, Frank Zappa, Jefferson Airplane, Mama’s and The Papas, Crosby, Stills, Nash, and Young etc.. But my mind was blown when my older brother started bringing home Led Zeppelin and Jimmy Hendrix! Later in the 80’s it was Devo, The B52’s, Adam and The Ants, Elvis Costello and all the other great ‘New Wave’ Alternative music of the times. Lately, I’ve been into Billie Eilish, and Geese.

Albert Einstein. To me he transcended what human beings are capable of by thinking creatively using mathematical principles and intuition to understand the universe.  And he was an accomplished violinist and a man of peace. Truly remarkable!!

For years I’ve had the music inside me, but haven’t had an ideal situation to pursue my passion. Now the kids have finished college, and are out of the house, I’m free to focus on my own interests. I’ve also built an awesome recording studio, a webpage, Leezoid.com, and a  Distrokid account so now I can publish my music to all the streaming music sites whenever I want and promote it through social networks. @lee.zoid on Instagram for example. The technology is tremendous right now. Of course a million others are doing the same thing. Getting exposure is as difficult as ever.

To steadily build up my catalog of releases. Continue to promote my stuff. Pursue publishing and songwriting opportunities. I’m currently releasing singles and Ep’s right now, and will perhaps release them in album form digitally, and on vinyl if it becomes popular enough, and makes sense financially.

My website design is similar to a vinyl experience as I can make it. Cover art, music, lyrics, that’s it. And looks and works quite well on the phone. I’m also looking to give agency to up and coming audio engineers who might be interested in co-running a professional recording facility here in Kent Washington.

Take a moment and hop on over to Leezoid.com and check out what’s going on. Album art, lyrics, and high fidelity streaming. Nothing to buy, but if you dig it, let me know on IG @lee.zoid, or send me an email at lee@zoidav.net. I’d love to hear what other artists, and music folk are up to. If you’re on Spotify, Tidal, Apple Music, etc., add Leezoid to your playlists!