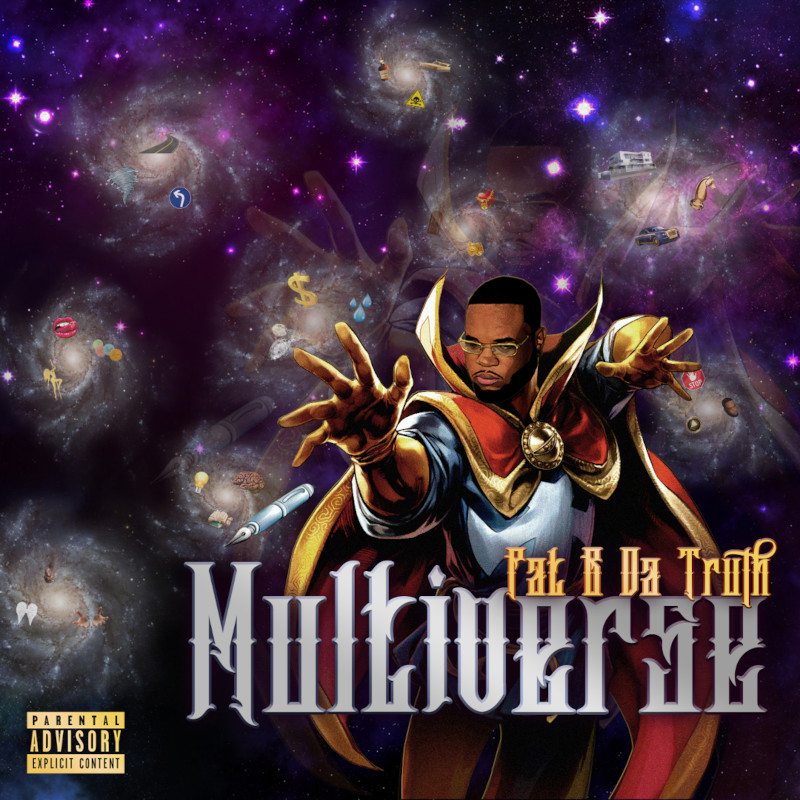 Pat B Da Truth is the professional name of emerging independent hip-hop artist, Patrick Lamont Barnett Jr. The Little Rock, Arkansas native is making his professional solo recording debut in 2022. This new project is but the latest chapter in a very musical life.

Raised in a family of musicians and avid music fans, 27 year-old Pat B Da Truth grew up surrounded by the sounds of classic hip-hop and r&b. Ironically, as a child he was known as the quiet member of his family. However, by the time he turned 12 years-old he was writing rhymes.

Inspired by pioneers like Tupac, Usher and Michael Jackson, Pat B Da Truth has cultivated a sound that blurs the lines between hip-hop, pop and r&b music. Early in his career he enjoyed success with his group The Huddle. After numerous mixtapes and campaigns, the group disbanded. Amid the turmoil of breakups and false starts Pat stepped away from releasing music for a while, until now.

Multiverse is the debut solo album from Pat B Da Truth, released worldwide via all major streaming services on August 5, 2022. From the 70’s soul and jazz vibes of tracks like “Boss Moves” and “Take My Hands” to the sophisticated Prince-style r&b vocal experimentation of “Ecstasy,” this 9-song collection is a fun multi-genre ride.  Trap and dirty south grooves (“Big Drip”,”Stop Playin Wit Me”) meet old-school story rap (“Twists N Turns”).

The many moods and styles of Multiverse come together in a cool and cohesive genre-fluid sound on tracks like “Fairweather Friends” and the brilliantly sexy “Comin’ Thru”. It is a fun listen from a multi-talented veteran musician at the top of his game. Check out the album in its entirety below, or listen on your favorite streaming service. You can also hear the tracks “Boss Moves” and “Understand” on the Deep Indie Beat playlist.

We had the chance to chat with Pat B Da Truth about his music, the past and the future. check out his answers to our 8 questions below. Follow the links at the end of this article to connect with the artist. Get on his socials and join him on this new phase of his musical journey.

8 Questions with Pat B Da Truth

I’m from Little Rock, Arkansas. Yes, like from the HBO documentary “Bangin’ in Little Rock’ that seems to be what everyone knows us for.. Can Y’all go research The Little Rock Nine or something? We have other histories too! But the city is full of steppers, no matter how you slice it.

About 15 years. I’m 27 now. I started writing raps at age 12, but I was 14 when I did my first recordings. I sometimes sit in the studio and laugh because of all the crazy experiences I’ve had for the sake of music that almost nobody even knows about.

I’m so appreciative of everyone who contributed to Multiverse, from the producers who sold me beats, to the engineer Glastudios and especially to the feature artists. My wife, Mrz Bombshell, features on the project. So does her best friend, Cay T, who happens to be married to Tre T, another collaborator and one of my best friends since the crayon box.

It took us over a year to finally record “Comin’ Thru (Toxic)” but we had some good times throughout the process. SoundOFF the General and Price the Poet were featured on Big Drip and both of them contributed a lot to the push for me to get back into music. Countyline is one of my favorite people on earth, really solid and always leaves me with good vibes after hearing a verse from him. I met KRG$ through SoundOFF, and he’s a gifted producer and vocalist.

You can expect to hear more music from me and each of these artists in the future!

I’m really a student of the game. If I had to have a ‘Mount Rushmore’ of musical influences I’d say the top 4 are King Los, Drake, T.I. and Lupe Fiasco. But I’m influenced by so many artists both mainstream and underground. Some of the homegrown talent that has helped me grow as an artist includes: How DBlack Do Dat -he not only sold me my first beats, but also provided me some of my earliest critiques and even gave me my name.

Vincent Von Vegga – He pushed me to be adventurous and outgoing with my craft as well as made some of the best quality music I’d ever heard when we were teenagers with nothing. He showed me anything was possible with drive and passion. Shin Dee of Beat Avengers – he let me know not to “over rap” and not to “attack” the beat non stop. He also showed me that even in music, the coolest thing you can do is be yourself, rather than try to make a lane as something else.

My greatest non-musical influence is my dad. O.G. Pat has always been my hero, and his opinion really matters. His feedback on my music has helped me shape my content as well as who I am individually. Something he told me early on in my music career was to make sure “Pat B Da Truth” and “Patrick” were the same person.

And that was something that resonated with me because at the time my friends and I were 16, 17 years old and basically just saying stuff that sounded cool and fit with the trends in hip hop (rapping about money, status, accolades etc that didn’t exist). It made me strive to actually become the person that I wanted to be seen as, so I could confidently make music portraying a persona true to myself. I feel like I’ve been the realest never since my dad pointed out to me that I wasn’t.

So for me, this project is really like a sample platter. It’s quite literally me putting together multiple verses to take the listener to multiple worlds. When I write, I have so much space to shape everything. It’s like creating a world from scratch, and gifting that to whoever will listen. Prior to this release, I had been known as a rapper, at least in Little Rock, but it had been 7 years since my last project dropped.

So in that time, I’ve practiced and experimented a lot. People have told me I have vocal sounds or cadences similar to E-40, Mike Jones, Drake, T.I., Nas, Tech N9ne, Akeem Ali, Lil Dicky, even Barack Obama, I kid you not. So with all the different sounds, different concepts and ranges of influence I write music from, you don’t know what to really expect from a Pat B song. This project was going to be my reintroduction to releasing music. It’s my way of saying “I have something for everyone, and I’m not in a box yet”. Everyone has a “sound”, before they are respected as a unique artist. But what about when they don’t have any standard to live up to yet? It’s like Nas said – “The first album freedoms and them fourth album pressures. A big difference between ’em”. I’m making the most of the freedom for now.

I’m still figuring everything out as I go, and not pretending to have all of the answers. I’m going to continue pushing Multiverse, but I also plan to start releasing a new single every week or 2, consistently. I have enough material to do this for about a year, and I can’t wait to share more with my fans, old and new. I appreciate everyone who comes along for the ride.

Anything I want to say? Tons. But I’m going to let the music speak volumes. Reach me @PatBDaTruth on all platforms if you have any questions. Until then, much love to every one of you: my family, friends, fans and supporters. Huddle Gang over everything. 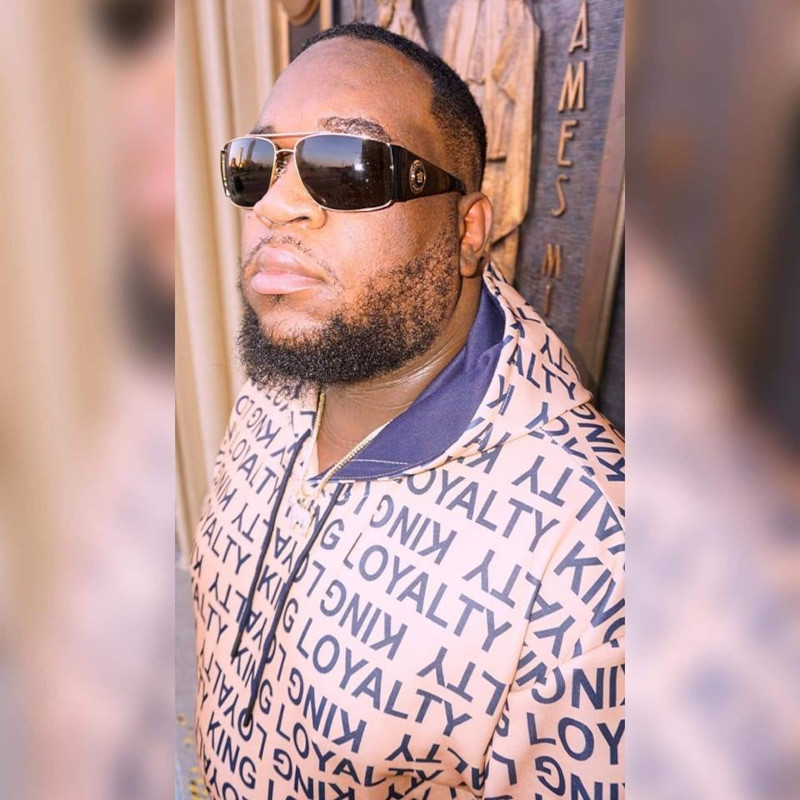 Connect with Pat B Da Truth