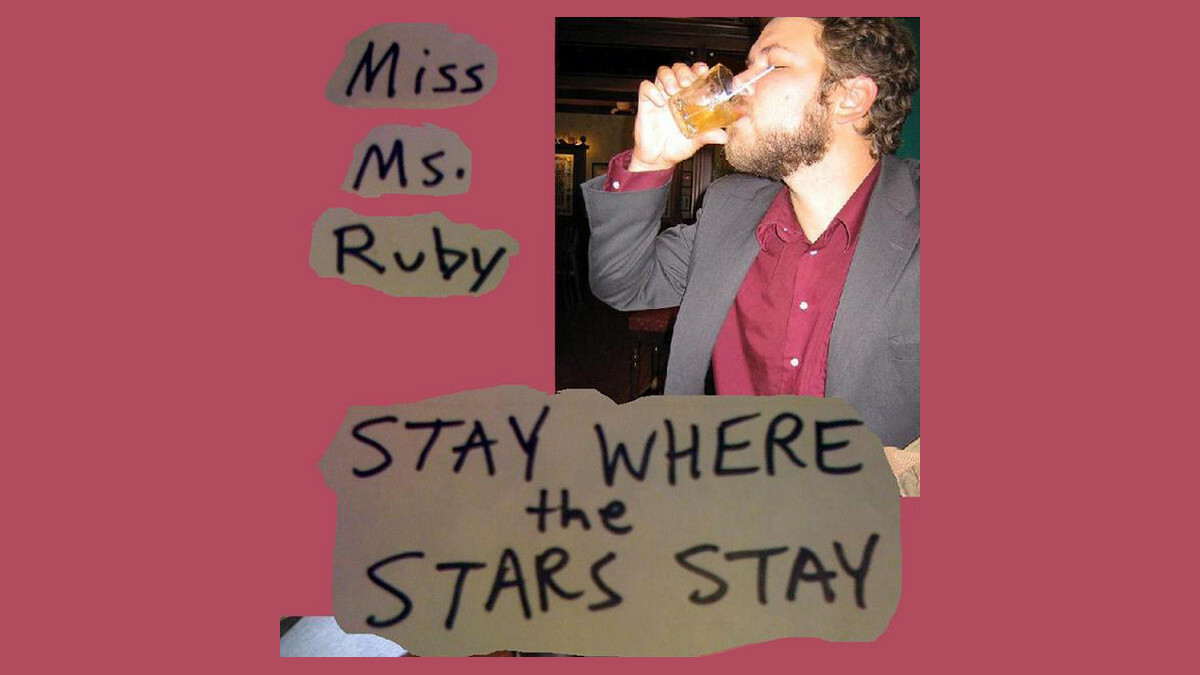 Once in a great while I’ll get a record in my inbox which lands really close to home. “Stay Where the Stars Stay,” by Miss Ms Ruby is one of them. The album is not so much an ‘album’ as it is a box of foggy memories. The nine songs in this collection are diamonds in-the-rough, and they have every intention of staying that way.

Back in the day, my friends and I recorded countless hours of drunken 2:00 AM, acoustic, songwriting/jam sessions. I have all of those old cassettes piled in boxes in the closet of my studio. I’m guessing Ben Enoch has a similar stash of sloppy jams. He is the central figure in the Miss Ms Ruby story.

Miss Ms Ruby is a band from Tennessee with Enoch as the frontman of a revolving line-up. Over time, the group saw thirteen members come and go. In their heyday they were a main-stay at the Nashville landmark dive bar, Springwater Supper Club & Lounge. There they frequently opened for the lo-fi legend synonymous with Springwater, Dave Cloud. Between 2005 and 2007, Miss Ms Ruby recorded the songs which in 2020 would be rediscovered and repackaged as “Stay Where the Stars Stay.”

This album sounds like a recording of the band’s after-gig party. As you listen, you’ll wish you were there. It’s late, so most of the party goers have gone to bed. The guitar player and drummer are still awake, so they start playing. The guitarist starts singing. Others randomly join in and fall away, but the singer keeps going. He sings about women and he sings about drinking. He delivers the occasionally brilliant and always smirking musings of a booze-soaked young poet with a guitar.

It wasn’t just one party. The ever-changing recording locations and personnel roster creates a cool mix of instrumentation and mood. At times the band hints at Lo-fi heroes like Pavement (“Now That I’ve Gone”) and Camper Van Beethoven (“Quitting”). The harmonized fiddle on the latter is really nice. Many of the tracks have a strong alt-country lean. “Maybe, Just Maybe” is a great song that sounds like a really cool Wilco B-side. It also has my favorite lyric on the record, “Just because you’re shiny, it doesn’t mean that you’re bright.”

Elsewhere the band conjures the spirit of 70’s era CBGB bands. “Days are Meant for Sleeping” and “Lothario’s Theme” sound like they could be from a recording of the band Television practicing. Of course, any record of smart, drunk young men playing Rock & Roll ultimately draws a comparison to The Replacements. There is no exception here. In all the right ways, Ben’s brokenhearted wise-ass harkens back to some of the greatest of Paul Westerberg’s beautiful disasters.

“Stay Where the Stars Stay,” is a fun listen for anyone who has stayed up too late, too many times with too much to think and drink about. Check out “Maybe, Just Maybe” on the Deep Indie Dive playlist. And follow the links below to connect with Miss Ms Ruby.